Our little boy is sixth months old. He has been in our lives for half of a year, which feels simultaneously like a lifetime and like the blink of an eye. Our life is vastly different than it was a mere six months ago, but I can no longer imagine my world without these bright blue eyes and big gummy smile. 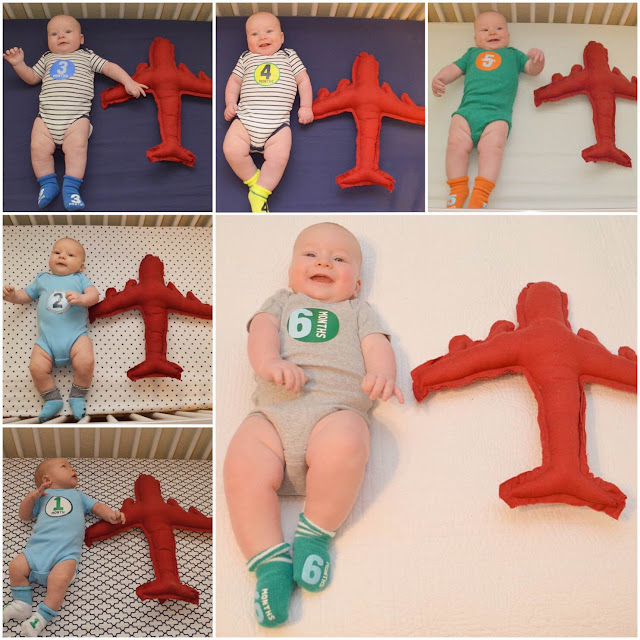 Aaron is a sturdy kid, clocking in at 20 pounds now. He's between 12 month and 18 month clothes -- ridiculous, right? He sleeps through the night (I'm one grateful mama), though he struggles a bit with naps. He is such a happy baby, and he's so curious about the world around him. He is generous with his smiles, he has a great belly laugh. He grabs everything within arms reach and chews on everything he can get his hands on. He's sitting now, which blows my mind. He loves to stand and gets frustrated that he can't crawl. I swear he has said "Mom" a couple of times, but, of course, no one believes me. He gives a good high five, and babbles and squeals and screeches away. He is particularly fond of riding around on his dad's shoulders and is a sucker for a good game of Peek-a-Boo. He's beginning to pet the dog and grab fist-fulls of fur -- poor Charlie. He loves to bang on the pages of his books and will help me turn the page. He has a tendency to chew on his books as well, but his book-loving mother tries her best to discourage such disrespectful behavior toward the written word. Bath time is another favorite. He chews on a rubber ducky while kicking with those chubby legs as hard as he can, splashing water all over the bathroom.

It's such a joy to watch this baby learn and grow and change. My brain cannot fathom how these months will someday turn into years, when my little boy will no longer be so little. But what a fun adventure it's going to be!
Posted by Paige at 6/24/2016