My husband and I have been trying to eat a little lighter over the last few months which has led to including more hearty salads in our supper repertoire. This salad brought a little bit of summer to our plates, even on a chilly September evening. The spicy shrimp, the sweet tomatoes, the bite of the arugula, the creamy avocado, and bright citrus dressing complement each other so well and were so flavorful that we didn't feel like we were watching our calories or our waist lines at all. 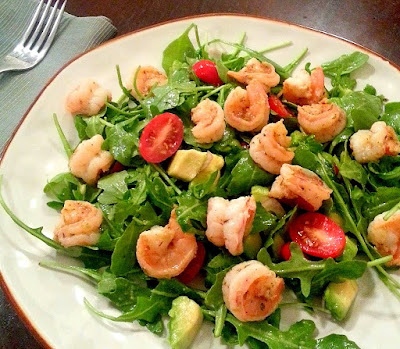 Directions
In a mixing bowl, whisk together 2 tablespoons of olive oil, cayenne, oregano, salt, and pepper. Add the shrimp and toss to coat. Let sit for about 10 minutes.

While the shrimp marinates, whisk together the lemon juice and 4 tablespoons olive oil for the dressing. Set aside.

Heat the remaining tablespoon of oil in a 10-inch cast iron skillet (any skillet will work, really) over high heat until shimmering. Add the shrimp and cook for about 2 minutes. Flip and cook 1 to 2 minutes longer, until just cooked through. Transfer to a bowl, and toss with the lime juice.

In a large bowl, combine the arugula, shallot, avocado, tomatoes, and cilantro. Add dressing (be careful not to overdress -- I didn't use all of mine. I put the leftover in a jar in the fridge to use later), and toss to combine. Serve topped with shrimp.

P.S. I think this would also be really good sprinkled with some toasted slivered almonds or pecans.