Pi Day is right around the corner, so I've been thinking about pies this week. (I'm an engineer, what did you expect?)  To get into the spirit of things, I decided that a quiche was in order.  Quiche is a great way to use up whatever vegetables are stashed away in the fridge (like a bunch of swiss chard), and for me, it's a good excuse to use my favorite pie dish, courtesy of Emile Henry.

With a quick saute of pancetta and the earthy chard, a handful of grated hard cheese, and a pinch of cayenne to spice things up, all held together by eggs and cream, you have yourself a quiche! I served it along with a green salad for a simple, yet indulgent, dinner.  This would be perfect for brunch as well, or bring it to a Pi Day Party with friends. A homemade crust would be even better, but some weeknights call for a pre-made crust. I'm not ashamed! For a vegetarian-friendly version, ditch the pancetta and maybe throw in some sliced mushrooms. Really, it's hard to go wrong here! 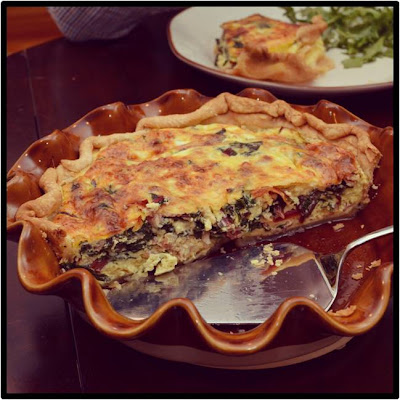 Heat a large skillet over med-high heat. Add a little olive oil, and once heated, add in pancetta. Cook until crisp.

Add swiss chard to the skillet and cook, stirring occasionally, until wilted.  When chard is done, remove the skillet from the heat.

Meanwhile, whisk together eggs, half and half, sour cream, cayenne, and salt and pepper.

Pour egg mixture over the top, and then fold over or crimp the pie crust edges in whatever pattern your heart desires (see these tips for ideas).

Bake for about 45 minutes, until the eggs are golden and set.

Slice into wedges and serve fresh out of the oven (or even at room temperature). 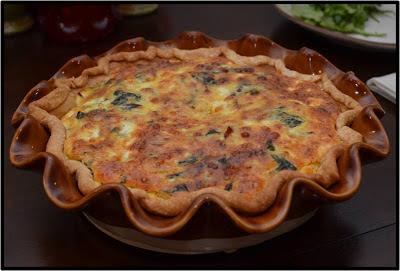