As I mentioned last week, we're back from a much needed vacation. We spent most of the two weeks in Nice, but we arranged for a long layover in Dublin on our way home. We only had a night and two full days to explore the city, so we tried to squeeze in as much fun as possible.

Our first stop was for fish and chips (with salt and vinegar, of course) from Leo Burdock. As there aren't any seats at the restaurant, we took our paper packets across the street to Christ Church and found a bench under a spotlight. It was dark out, and the area was deserted, but we made ourselves comfortable and dug in. 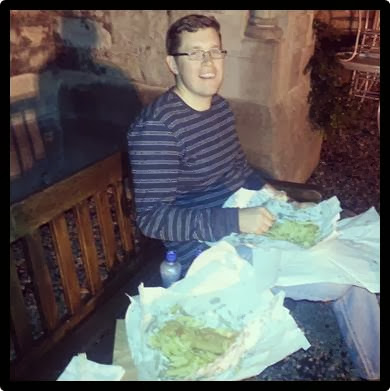 After we ate, we wandered over to the Temple Bar area where things were lit up and bustling. 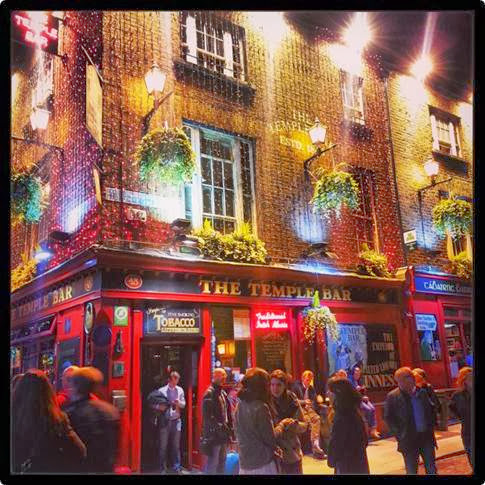 Down the street from The Temple Bar, we ducked into the quieter Farrington's Pub. We lucked out and found a couple bar stools and sipped on pints while listening to a local musician. 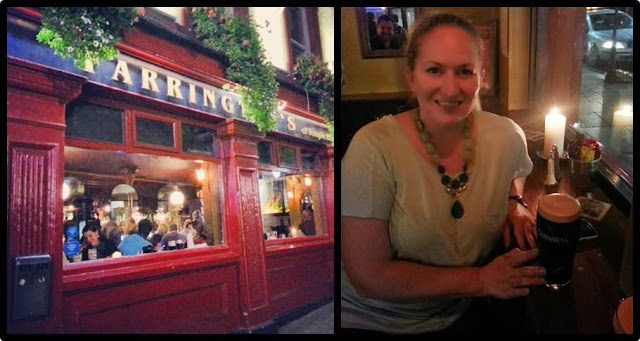 The next day we got started with breakfast at Brother Hubbard. It's an adorable place! The first thing you see is a counter overflowing with beautiful baked goods. We made our way to a table on the covered, heated back patio where benches were draped with wool throws in case you get chilly. 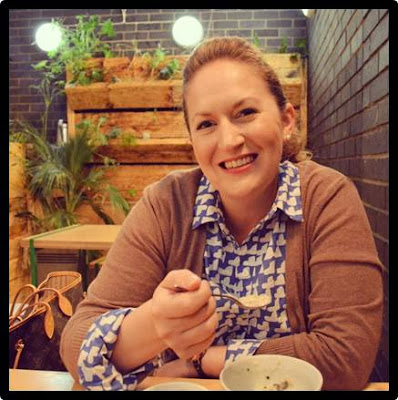 While we didn't need the throws, we did need steaming bowls of traditional Irish porridge and coffee! It's served along with honey, brown sugar, and cream, and I got mine with dried fruit and nuts mixed in as well. I wish we had this place back at home in Boston! 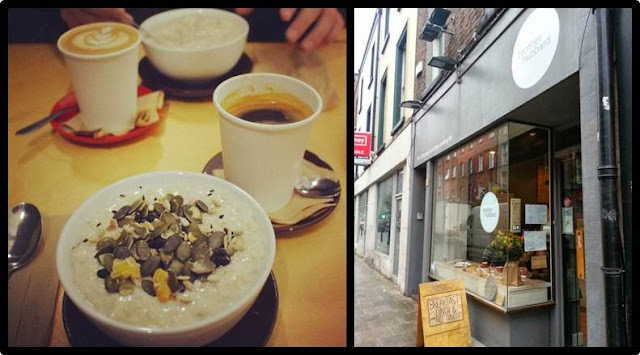 After breakfast, we got out our umbrellas for the walk to The Old Jameson Distillery. I think this was my husband's favorite part of the trip! 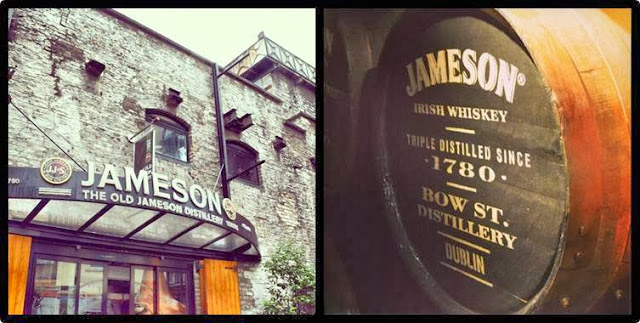 After the tour, he was one of the lucky volunteers to participate in a guided whiskey tasting, earning him a certificate as an official Jameson whiskey taster! 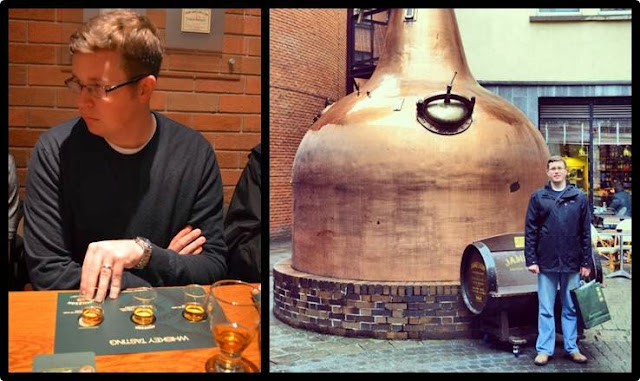 Our original lunch plans fell through (the place we wanted to go was closed), so after wandering around in the rain, a little place called Dublin City Food caught our eye. It's kind of a weird spot (for example, my husband's meal came out on nice dinnerware while mine was on a cafeteria tray), but the food was good. I really enjoyed my Reuben made with in-house cured pastrami, a cup of curry vegetable soup, and my beer, a Knockmeal Down Porter from Eight Degrees Brewing. 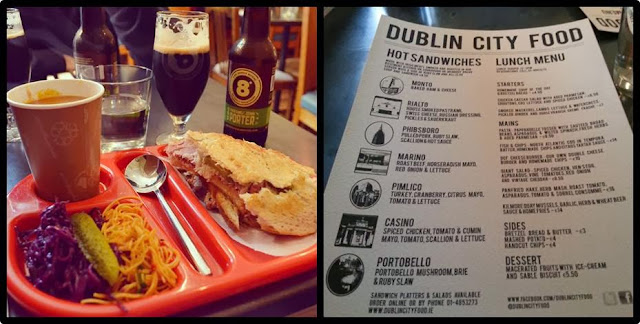 Down the street from the restaurant, Bewley's Coffee caught our eye, mainly because we saw they were doing pourover coffee. After twelve days of French espresso (not their strong suit), we needed a real cup of coffee! We cozied up at a table, read a little (James Joyce's Dubliners seemed like an appropriate choice), and enjoyed some people watching. 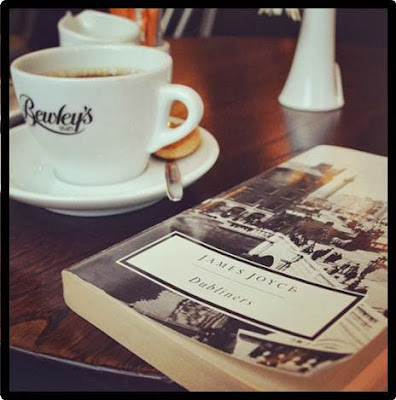 Our next adventure was a visit to Trinity College.  We could barely see the lovely campus from underneath our umbrellas (the rain was only getting harder), but we were happy to duck inside The Old Library for The Book of Kells exhibit (a beautifully hand-written and decorated copy of the gospels from the 800s) and the Long Room. 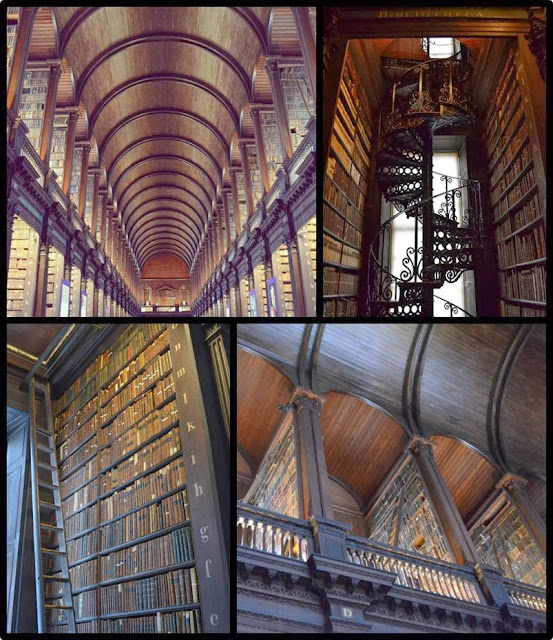 The Long Room, a library with books stacked clear to its long arched ceiling, featured a music exhibit (including a hand-written score from the premiere of Handel's Messiah's in Dublin) that was fascinating, but the real draw was the sheer beauty of the library. I would live here if they would let me! It's a book lover's dream. 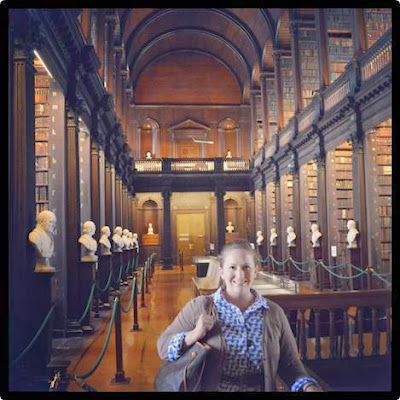 From Trinity College, we walked to the home where Oscar Wilde grew up, along the way admiring some of the grand and colorful Georgian doors. 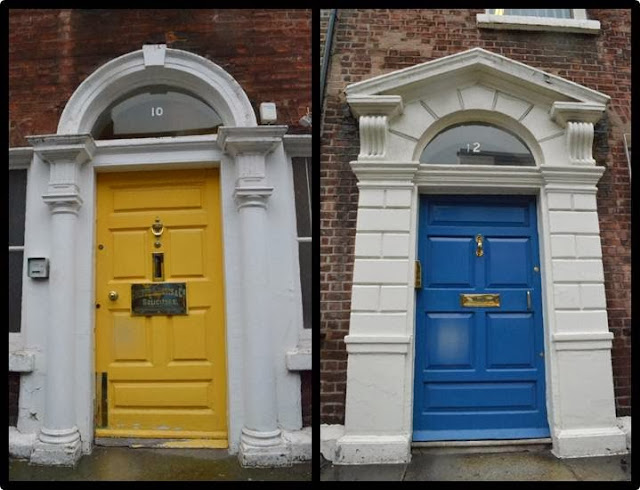 Across the street from his home in Merrion Square Park is the Oscar Wilde Statue where he can be found lounging in a smoking jacket. After paying him a visit, we were wet and cold, so we trekked back to the hotel, changed into dry clothes, and hung out there until it was time for dinner. 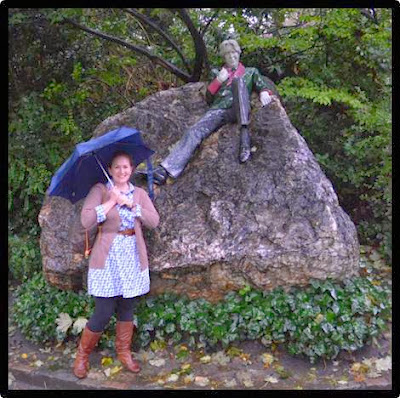 Dinner at Green 19, where we managed to snag the last open table, was worth venturing out into the elements yet again. The staff was warm and friendly (as most Irish people seemed to be). While my burger was a tad overcooked, the fries and homemade ketchup were really good. And my husband's Irish Beef Stew was outstanding. They also serve good cocktails -- our favorites were their Mojito and the Mexican Green with tequila, Maraschino, lime, grapefruit, and chiles.

We then walked along St Steven's Green to get to O'Donoghues for a couple after dinner pints. This place is maybe the perfect dive bar. It's crowded and noisy, but they don't bother playing music so you can still talk. The counters are sticky, and the walls are covered in framed paraphernalia. Folks are there from seemingly every walk of life, and everyone is happy to have a pint in their hand. In the back, my husband said the entire room joined in to sing Irish drinking songs at one point! 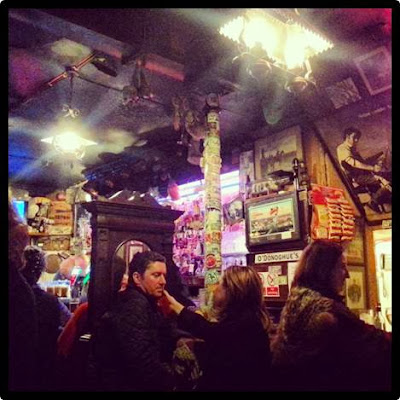 We began Day 2 with a visit to the Guinness Storehouse. It's quite an operation -- a self guided tour up seven floors of displays about the brewing process and the history of Guinness. There are vintage ads, models of beer tankers used to deliver beer across the ocean (and a bomb that the Germans dropped on one tanker during WWII), an exhibit showing how wooden beer barrels were made by hand, etc, etc, etc. At the top of it all is the Gravity Bar, a circular glassed in room overlooking all of Dublin. Here you can grab a seat and sip a free (and properly poured) pint of Guiness . 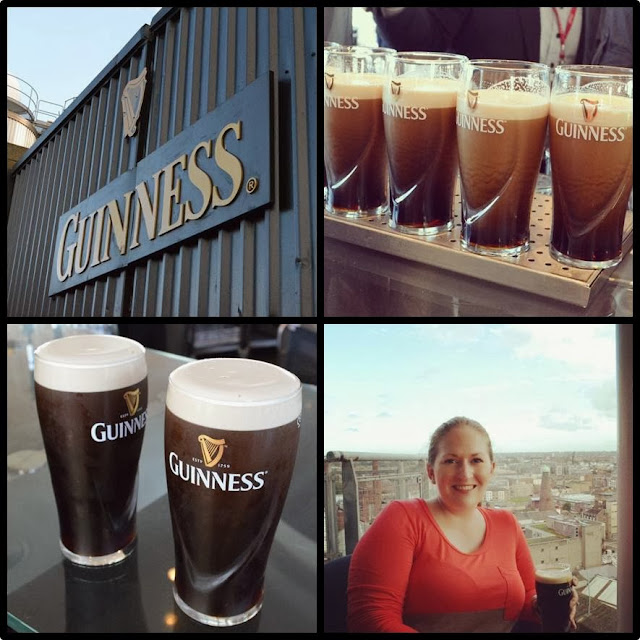 Here's my husband staring in his very own Guinness ad! 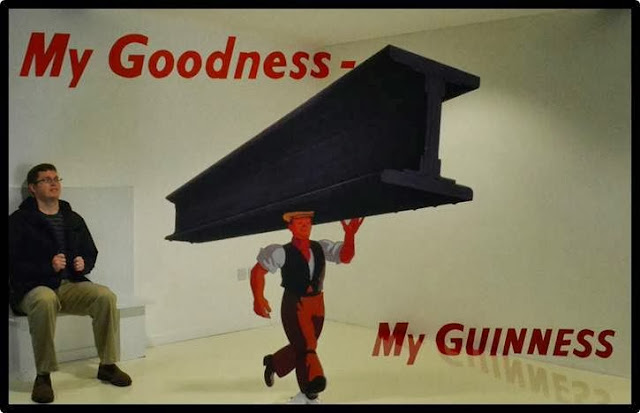 After finishing our beer, we went for lunch at The Winding Stair. Along with The Long Room, this was my favorite stop in Dublin. Upstairs is a restaurant dishing up Irish fare made with local ingredients, and downstairs is the cutest bookstore. 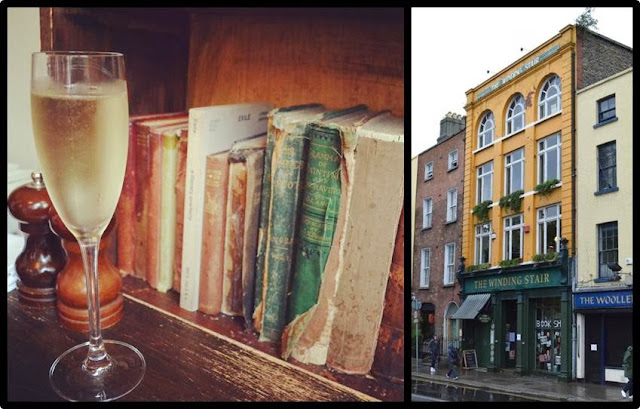 For lunch, I had locally smoked haddock poached in milk served over cheesy mashed potatoes. It sounded weird, and the waiter recommended it, so I had to try it. Boy am I glad I did!  After clearing our plates and downing another cup of coffee, it had started raining again. What a great excuse to check out the bookstore! It's a small space whose walls are lined with new and used books, locally made odds and ends, and a few armchairs where you can sip tea, coffee, or wine while you read. 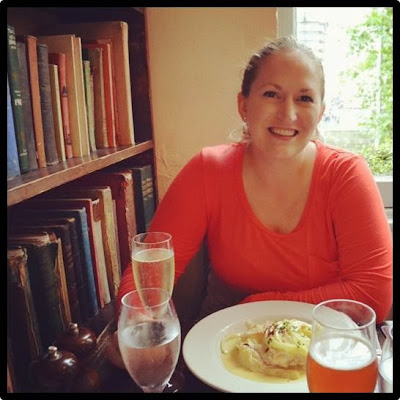 Once the rain subsided, we crossed the historic Ha'penny Bridge into Temple Bar where we wanted to check out the weekly Used Book Market and the Food Market. 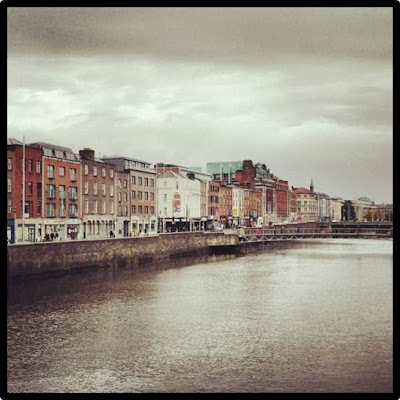 The Temple Bar Book Market was pretty small, possibly due to the weather. We poked around a lbit but after not finding anything too tempting, we walked over to the Temple Bar Food Market. It's a small covered (thank goodness) market. Folks were selling produce, local cheeses, baked goods, spices, wild game, and butchered meats. There were several food vendors cooking up crepes, sandwiches, sausages, tacos, and even platters of raw oysters. We passed on food, but since it was chilly and damp, we got a cup of mulled apple cider with a little apple brandy stirred in to sip as we sat and people watched. 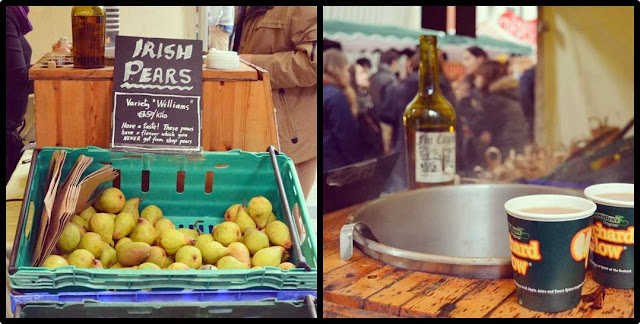 From the market, we grabbed a Guinness at The Temple Bar. It was pretty touristy, but hey, we can say we went. 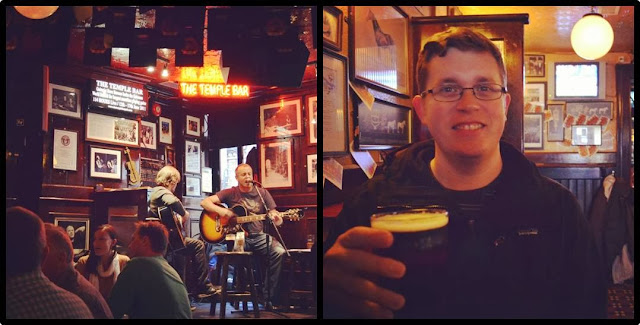 For dinner, we went to Porterhouse Brewing Company, a restaurant brewing their own beers and with a good selection of imported craft beers.We found a table in front of a big screen showing a rugby game. Their beers were good (though not great), and it was solid bar food. I really enjoyed trying Aspall's (a dry cider from England), but what we enjoyed most was the rugby! Y'all, that game is tough. Following the Irish team's win, a local band set up. After a few songs, we headed back to the hotel to pack for our flight in the morning.

Dublin was a fun adventure for us and our first visit to a country where many of our ancestors were from. Here's to hoping for another visit someday, a visit to see some of the beautiful countryside, maybe the coast, and more whiskey distilleries for my official whiskey taster.
Posted by Paige at 10/30/2013