Back in July, my husband and I took a trip to Nova Scotia. When we found out I was expecting, we began brainstorming vacation ideas.  We wanted to go somewhere new and fun, but we also wanted it to be a trip truly centered around rest and relaxation. The more we researched, a trip to Nova Scotia to visit the quiet seaside sounded like just the right thing for us.  We also loved the idea of going somewhere a little milder during the sweltering Texas summer.

When we told people our travel plans, we received quite a few puzzled looks, as I don't think Nova Scotia is a particularly popular destination for Texas folks, but it should be!  During our years in Boston it was always a trip I longed to take (especially since one of my favorite literary heroines, Anne of Green Gables herself, grew up in Nova Scotia before moving to Green Gables on Prince Edward Island), and we had the most wonderful time during our week there! 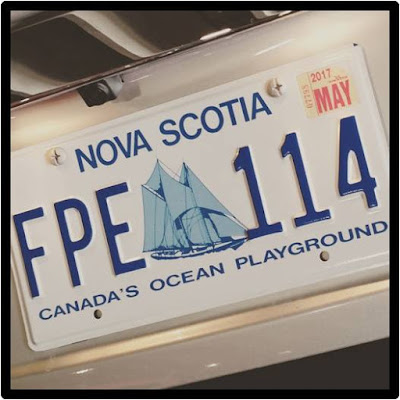 We spent our first three days on the far western shore of the peninsula in the tiny fishing village of Middle West Pubnico where we rented the most amazing waterfront guest house on airbnb.  The owners lived in the main house next door and were so welcoming and friendly. We woke up to the sun rising over the water, seen through a wall of windows along the back of the house. We spent quiet mornings on our patio eating breakfast and enjoying the view. We explored the area during the day, visiting little museums, trying our hand at geocaching, taking scenic drives, and eating seafood directly off local fishing boats.  In the evenings, we pulled on a sweater and sat around the fire pit. It was just as beautiful and relaxing as we hoped it would be. 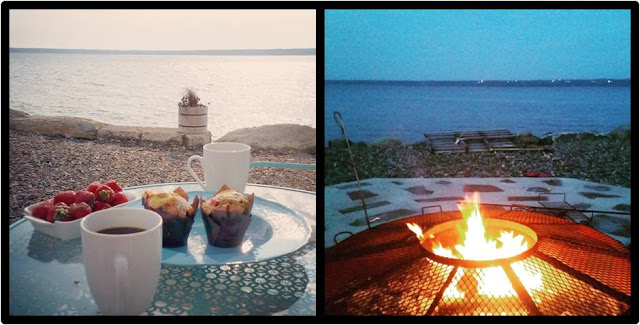 For our last three days, we rented a different apartment in Lunenburg, a slightly larger (and as it turned out, much more touristy) fishing village about halfway between Pubnico and the capital city of Halifax. On our way from Pubnico, we stopped in Shelburne, a lovely town on the water, for lunch and for a brewery visit (more on that later). Once in Lunenburg, we spent some time exploring the area, but we also took a couple great day trips while we were there: one to the post card worthy village of Mahone Bay and another to Peggy's Cove to visit the Peggy's Point Lighthouse. 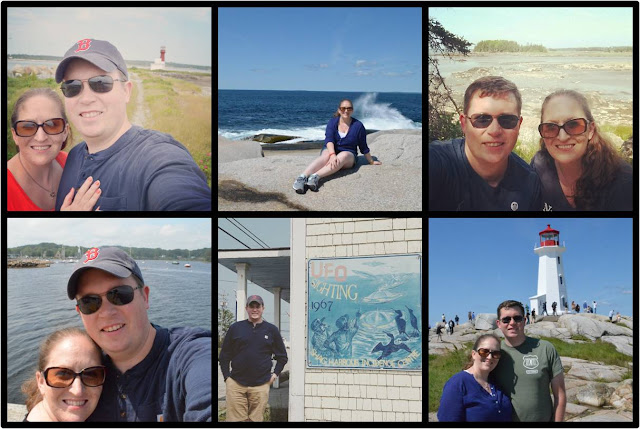 We stumbled on to some truly wonderful food in Nova Scotia. Our most memorable meal was at a more upscale restaurant off the beaten tourist path in Lunenburg called Lincoln Street Food (#1). The menu was fresh and seasonal and boasted plenty of Atlantic seafood. We also loved trying a local favorite, haddock with creamed lobster, at the Red Cap Restaurant (#7) which was right down the street from where local fishing boats brought in their catch. Throughout the week we found  pizza with delicate seafood chowder (#2), hearty breakfast fare (#4), authentic (and fantastic!!) German schnitzel thanks to descendants of German settlers (#8), ice cream with a view (#5), loose leaf tea by the pot (#3), and mussels by the pound served on a patio overlooking the water (#9). 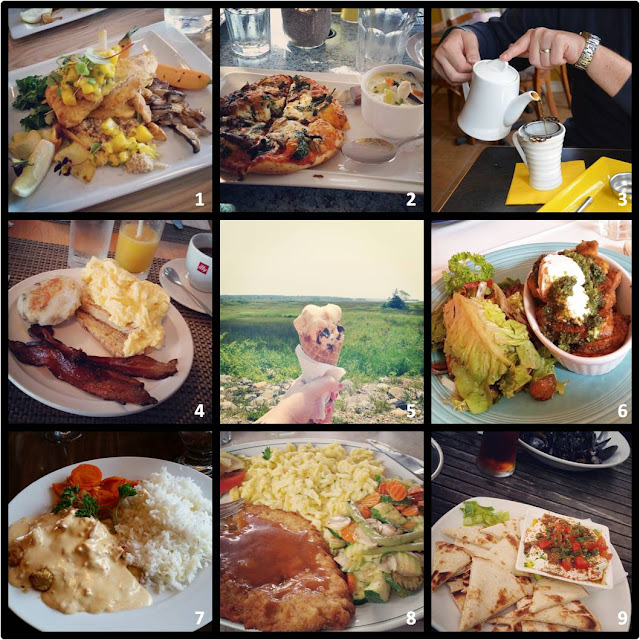 Other notable meals (not pictured above) were had at Dennispoint Café in Lower West Pubnico (get the fried clams and the poutine!), at Rebecca's Restaurant in Mahone Bay (I loved the vegetarian options here), and Brooklyn Warehouse in Halifax (you can't go wrong with their burger and with a pint of local craft beer).

To stick with our relaxing vacation vibe, we limited ourselves to one or two activities per day (meals don't count, obviously). My favorite outings were geocaching around the Pubnicos and a visit to Peggy's Point Lighthouse in Peggy's Cove.  Geocaching led to some great scenic drives off the beaten path, and the lighthouse at Peggy's Cove was so incredibly beautiful. It was easy to see why it's one of the most photographed spots in this region of Canada. We made the drive from Lunenburg on a perfect sunny day. Once we walked up the rolling granite rocks to view the lighthouse, we found a perch on one of the rocks to soak up some sunshine and watch the waves come crashing in. I think I could have sat there for ages if only our stomachs hadn't started growling (if you visit, definitely visit Rhubarb for lunch afterward)! 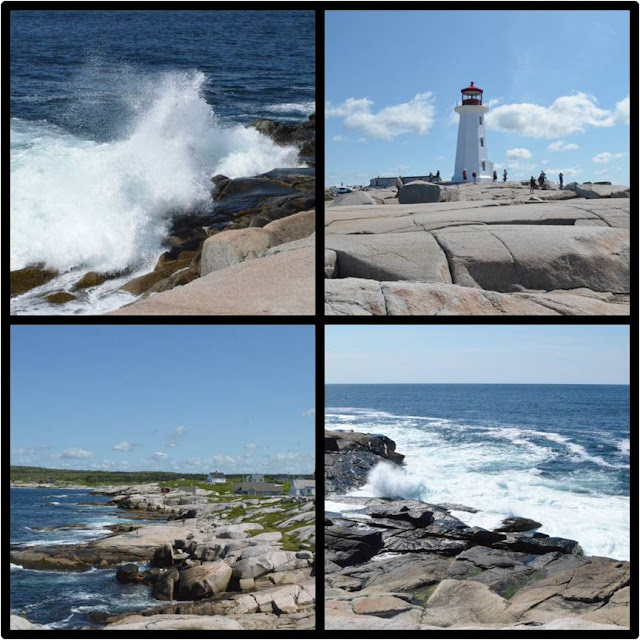 We also paid visits to a couple Acadian museums in the Pubnicos (Acadians were French settlers that were eventually driven out by the English. Some eventually returned, but many ended up in Louisiana and are the ancestors of the Cajuns), a fantastic craft brewery called Boxing Rock, fishery and railway museums (including incredibly detailed model railroad recreations of historical regional rail stops), local scenic spots, a distillery, and even a UFO museum (touted as the Area 51 of Nova Scotia)! 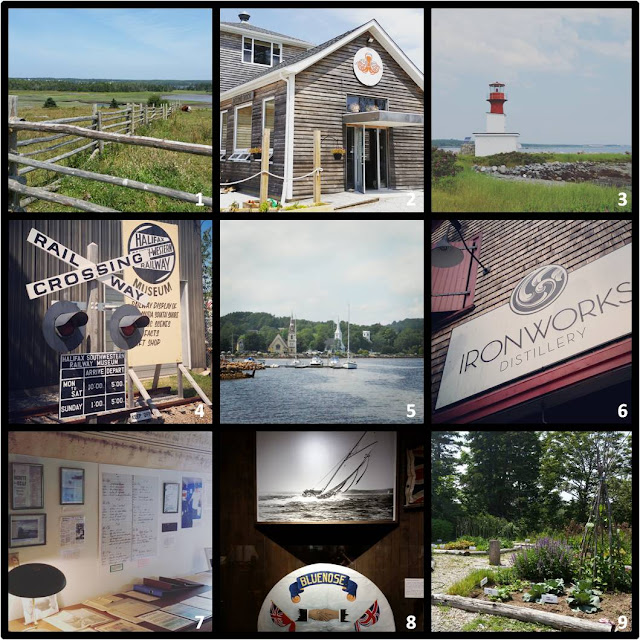 And would it be a vacation with this husband of mine if there weren't a few stops for beers along the way? I think not! He's drinking for two now, after all. 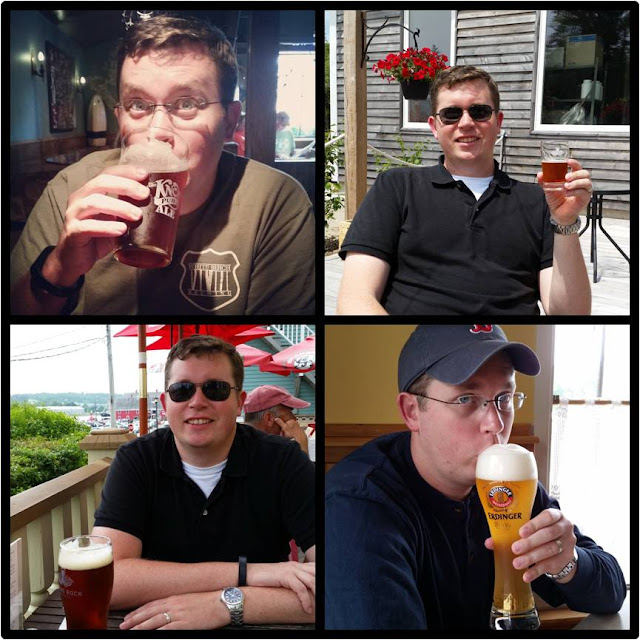 With that, I think I've managed to hit the high points of our trip. It was a great final long-distance get away before baby's arrival, and I know I'll treasure the memories we made. ﻿
Posted by Paige at 10/07/2015