After having friends stay with us all last week and then giving visiting family a whirlwind tour of Boston on Saturday, I just wanted to stay home, stay in my pajamas all day, and putter around in the kitchen by the time Sunday rolled around.

I have a standing offer from a friend in LA to do a canning swap: a jar of her canned peaches for a batch of apple butter, so I bit the bullet and finally tried my hand at canning using the last of our hand-picked apples.  And do you know what I found out? Canning, though a little time consuming, really isn't very hard. It was a lot of fun, and it left me feeling quite accomplished, like a good little Suzy Homemaker.

I used two blogs (The Kitchenette and Food in Jars) to come up with a recipe and to guide me in the canning process. Another fantastic resource I found was the Serious Eats Beginner's Guide to Canning.

I used the following ingredients:

First, I put the apples in a dutch oven, poured in enough water to just cover the bottom of the pan, and cooked over medium heat for about 20 minutes, until the apples were soft and breaking apart. 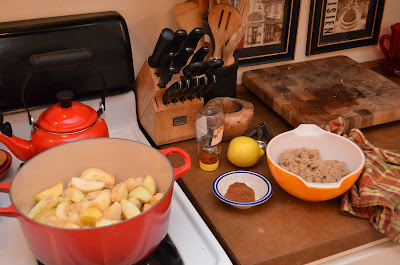 Once the apples were softened, I pureed them with an immersion blender (a food mill or food processor would work too). Then I added sugar, spices, honey, and the lemon juice for a bit of acidity. 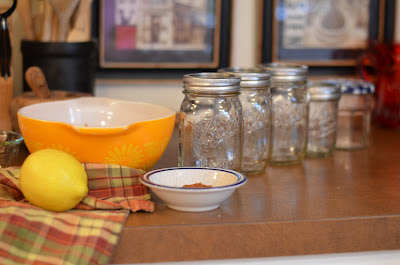 Once everything was stirred in, I cooked the apple butter over low heat for about 3 hours. 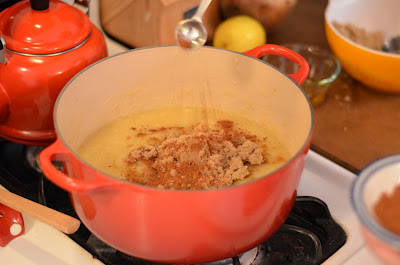 Toward the end of the cooking time I sterilized my jars by placing them in a large stock pot, covered them with water, placed the lid on the pot, and brought it to a boil. I put a steamer basket in the bottom to keep the jars from sitting on the bottom of the pot. To soften the sealing compound on the lids, I brought water in a saucepan to a very gentle simmer (not a boil) and dropped in the lids for a few minutes. 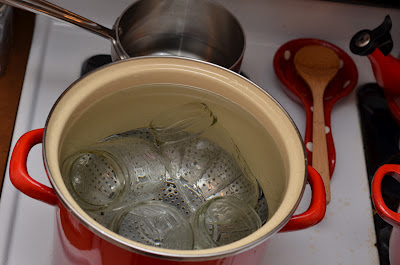 Once the jars were sterilized and the lids are ready, I used salad tongs (I don't have the proper canning tools) to lift the jars out of the water. I ladled apple butter into the jars, leaving about 1/4 to 1/2 inch of headroom, and then wiped the mouth of each jar with a clean towel to remove any stray apple butter. Using salad tongs again, I removed the lids from the saucepan and placed them on the jars. I then screwed the rings on to hold the lids in place. 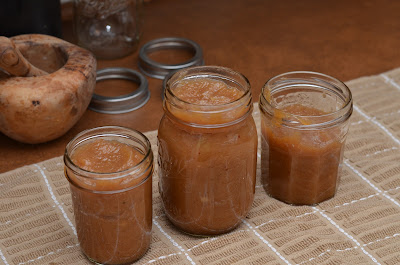 I placed the filled jars back in the stock pot (after removing some water) and brought the water back to a boil. I let them boil for about 15 minutes and then removed them to a clean towel. 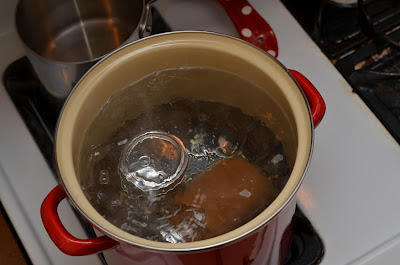 A few minutes into the cooling process, I heard little pings as the lids sealed shut. I let them cool for the rest of the evening until they were room temperature. At this point, I removed the rings and tried picking the jars up by the lid, using my fingertips, to see if the lid stayed on. It worked! Like magic, the jars had sealed, so I screwed the rings back on and found the jars a little spot in my pantry. 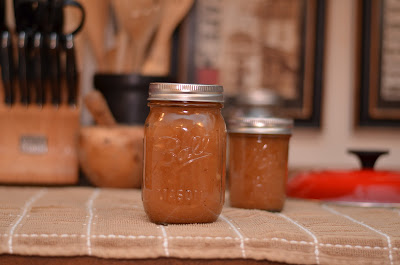 Now, if you don't feel like doing the all-out canning process, you can still make and enjoy apple butter.  Just ladle it into a clean jar. Once it cools, store it in the fridge, and it should be good for a few weeks.
Posted by Paige at 10/09/2012