Last weekend we hosted our very first pumpkin carving party. With our friends Kevin and Andrea, we celebrated all things fall -- warm comforting stew, pumpkin beers, football, mulled apple cider, carving pumpkins, and roasted pumpkin seeds! This post is pretty belated since it's no longer the season for carving pumpkins, but hey, at least it's still the season for everything else!

For dinner, I set the table with fall linens (when you get married in October, all of the linens you receive are in fall colors) and a bowl of apples that we picked for a centerpiece. My husband was the chef for the evening, and he whipped up a delicious Pork and Green Chile Stew (Chile Verde) to serve with homemade flour tortillas (homemade tortillas require a little extra effort, but man are they good!). It was warm and hearty, perfect for a chilly evening. 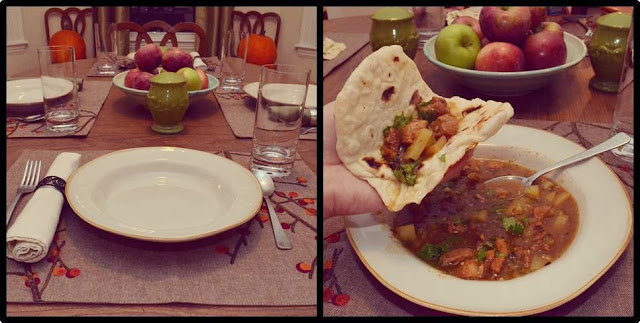 After dinner, it was time for the UT game.  And since you can't watch football without beer, we decided to sample pumpkin beers, serving mostly local options: Southern Tier Pumpking (our favorite), Cambridge Brewing Company Great Pumpkin Ale, Sam Adams Harvest Pumpkin Ale, Sam Adams Oktoberfest (not a pumpkin beer but it's Fall-ish!), Cisco Brewing Pumple Drumkin (we didn't care for this one). 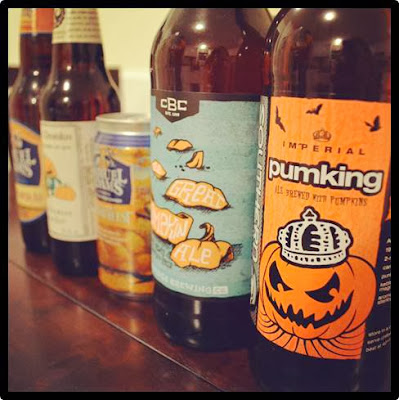 I also put on a pot of mulled apple cider right before our guests arrived. I have a super simple recipe that I use, and it can sit and simmer until you're ready to serve it.

Mulled Apple Cider
In a slow cooker, pour in 1 gallon of plain apple cider and stir in 1/4 cup brown sugar. Then put 4 cinnamon sticks, 3 tsp whole cloves, 2 pods of star anise, ~1/2 inch of ginger, thinly sliced, all onto a piece of cheesecloth, and tie it up with a piece of kitchen twine. Add the bag of spices and slices from one orange into the slow cooker. Heat on Low for at least a couple of hours before serving. (And while delicious on its own, it's also good with about 1 oz of bourbon stirred into each mug!) 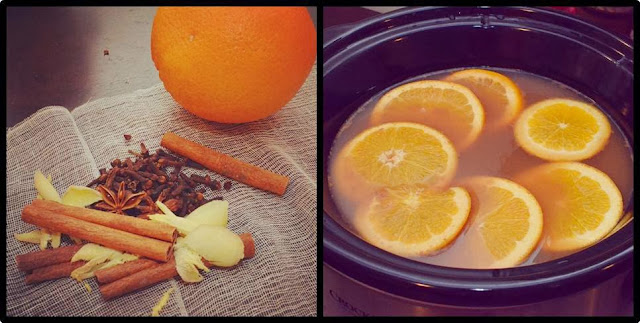 Around halftime, the Longhorn game had a rain delay, a perfect opportunity to start carving pumpkins. I spread out a big table cloth in the living room, and we put a few pieces of newspaper under our pumpkins to keep the innards from seeping through the table cloth and onto our rug. Using tools and patterns from grocery store carving kits, we got to work! (It's also a good idea to put out a few bowls for pumpkin innards and paper towels and/or kitchen towels for wiping hands). 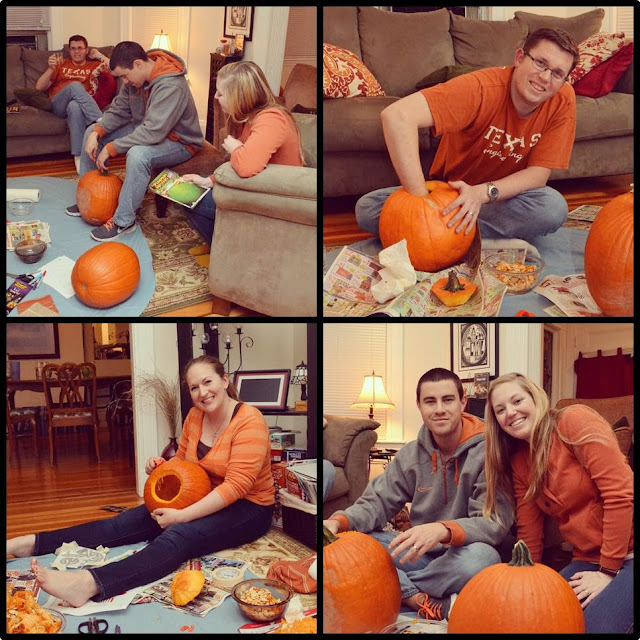 It was so much fun, and everyone's pumpkins turned out great! I tried out the engraving technique, which was fun but disappointing because it didn't glow like it was supposed to when I put a candle inside. I guess I didn't scrape away enough of the pumpkin.  Everyone else went with traditional jack-o-lanterns. Here's the line-up:

And here they are after the official lighting ceremony! :) 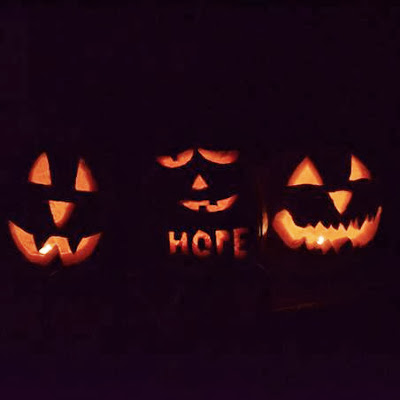 With the pumpkins done, I poured everyone a mug of cider, and we served the delicious homemade cookies and ice cream that our friends brought for dessert. And finally, before they headed home, I roasted some of the pumpkin seeds leftover from carving.
Roasted Pumpkin Seeds
Preheat oven to 300°F. Scoop out the seeds and then clean by rinsing them in a colander and removing any remaining pumpkin flesh. Dry the seeds by dumping them onto a towel and patting dry.  Once dry, pour the seeds into a bowl. Add in olive oil, salt, pepper, cumin, paprika, and chili powder. For seeds from one pumpkin I used  a couple teaspoons of oil, a couple good pinches of salt, pepper from a few twists of my grinder, 1/4 tsp cumin, 1/4 tsp paprika, and 1/8 tsp chili powder. Place the seeds on a foil-lined baking tray and spread them out in a single layer, and place the baking sheet into the oven. Roast for about 20 to 25 minutes, stirring every 10 minutes or so, until the seeds just begin to brown. 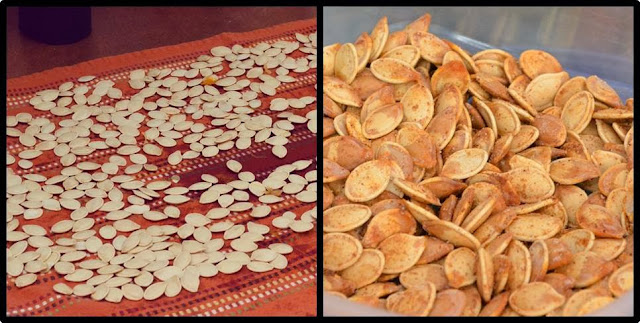 It was such a fun evening -- a great excuse to get together with friends who we don't see nearly enough! We put our pumpkins out on the front porch to greet trick-or-treaters on Halloween. And now, somehow it's already November with Thanksgiving right around the corner. Where is the fall going?

Labels: How To, Life, Recipes