Way back in October, my husband and I celebrated our 3rd anniversary with dinner at Island Creek Oyster Bar followed by drinks right across the Hotel Commonwealth entryway at The Hawthorne --  two fine establishments without ever having to walk outside (during the Boston winter you can't beat that). It's basically a fancier version of the uber convenient date night combo Central Kitchen + Brick and Mortar. I know it's super late to be telling you all this, but the food! The drinks! The convenience! You need to know!

So let's start with Island Creek Oyster Bar. Their menu focuses on local oysters and seafood (you didn't see that coming did you?). We were seated in the formal dining room rather than the bar area which was buzzing with the after work crowd. Since we were in a celebratory mood, we began with glasses of bubbly. 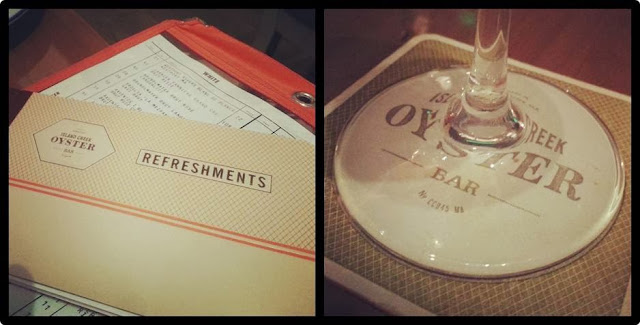 We also ordered a couple different oyster varieties and a few shrimp cocktail (Island Creek and their sister restaurant Eastern Standard have the best cocktail sauce. I don't know what their secret is, but it's ridiculously good). For our entrees, my husband got fresh fish while I tried their popular Lobster Roe Noodles. The homemade pasta has an orange tint from the lobster roe, and the fresh noodles are tossed with generous hunks of lobster meat, brasied short rib, mushrooms, brussels sprouts, and grated pecorino. It's incredibly rich, but I powered through and cleared my plate. Delicious! 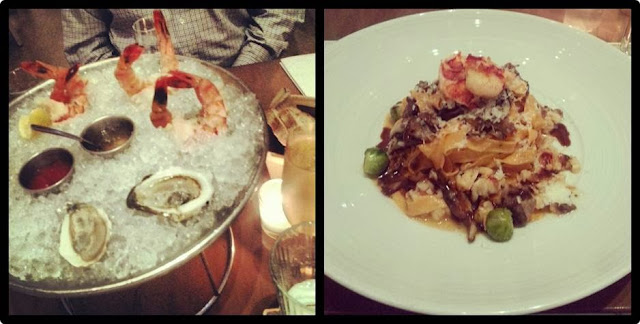 After dinner, The Hawthorne was stellar, us usual. Their cocktails and chic, cozy atmosphere are hard to beat. Being a weeknight, the place was relatively quiet, which we prefer (we're getting old). We sunk into arm chairs, leisurely sipped our drinks, and made googly eyes at each other like we were a couple of newlyweds. Shown below is the highly drinkable Naked and Famous with mezcal, Aperol, Chartreuse, and lime juice. 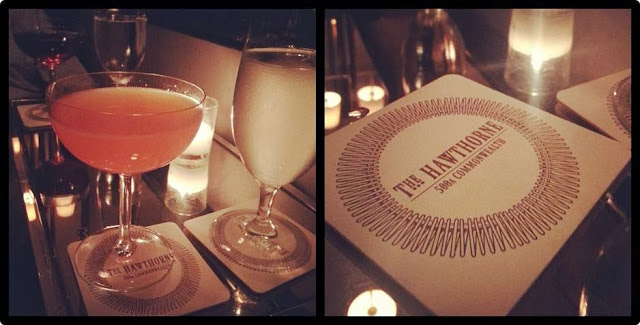 All in all, a great way to celebrate three wonderful years together. Here's looking forward to many, many more!