It's Christmas Time in Texas

How do I begin to recap two weeks in my home state of Texas for the Christmas holidays? I guess I'll just dive right in.

After arrival at DFW, we drove across the gently rolling expanse of hay bale-dotted pastureland that is East Texas.  Just when you think you've surely landed yourself in the middle of nowhere, you find my hometown, Paris. At home, family was in the living room, the tree was up, berries and garland lined the mantle, little gingerbread men were standing sentry on the kitchen counters, and lights twinkled outside. After hugs all around, we were  handed coffee and Christmas cookies and directed to a seat. We were home. 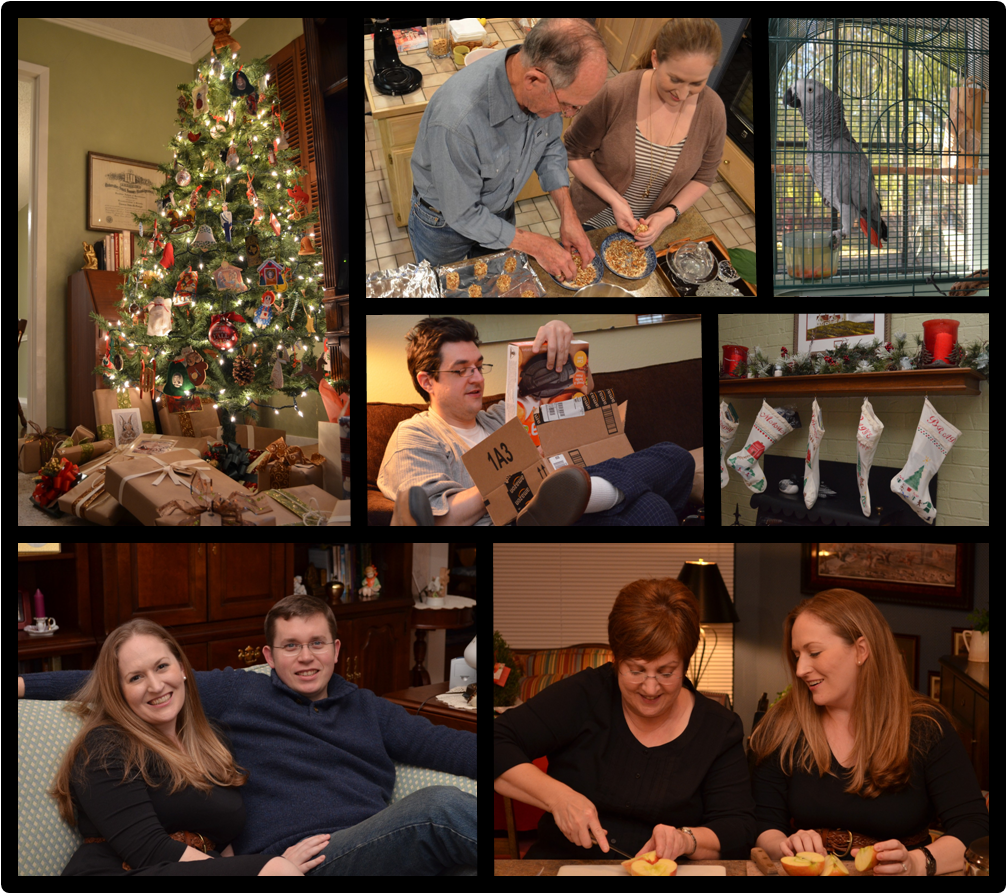 We spent the days watching Christmas movies, playing games, chatting with family, wrapping presents, cooking, and eating. My brother's bird, Mia, called to us as we cooked, usually shamelessly asking for treats. We spent an afternoon baking pecan cookies at Papa and Grandmom's with real Texas pecans, and I got to catch up with my friend Alison over coffee. 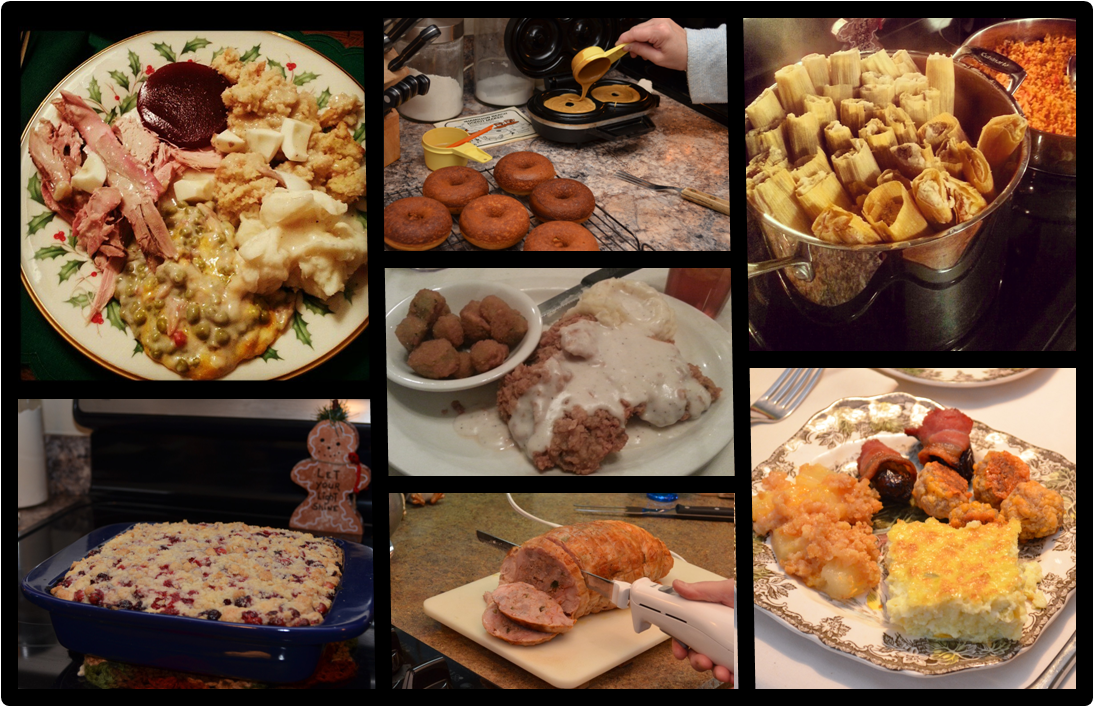 Here's our annual Christmas Eve family photo. Papa and Grandmom always insist that we take one. There are always protestations when it's first brought up, no one can ever decide where we're going to pose, there's generally confusion over who stands where, the first few shots are always terrible because no one is ready, and finally we end up with a deceptively effortless-looking photo that we'll treasure in the years to come. 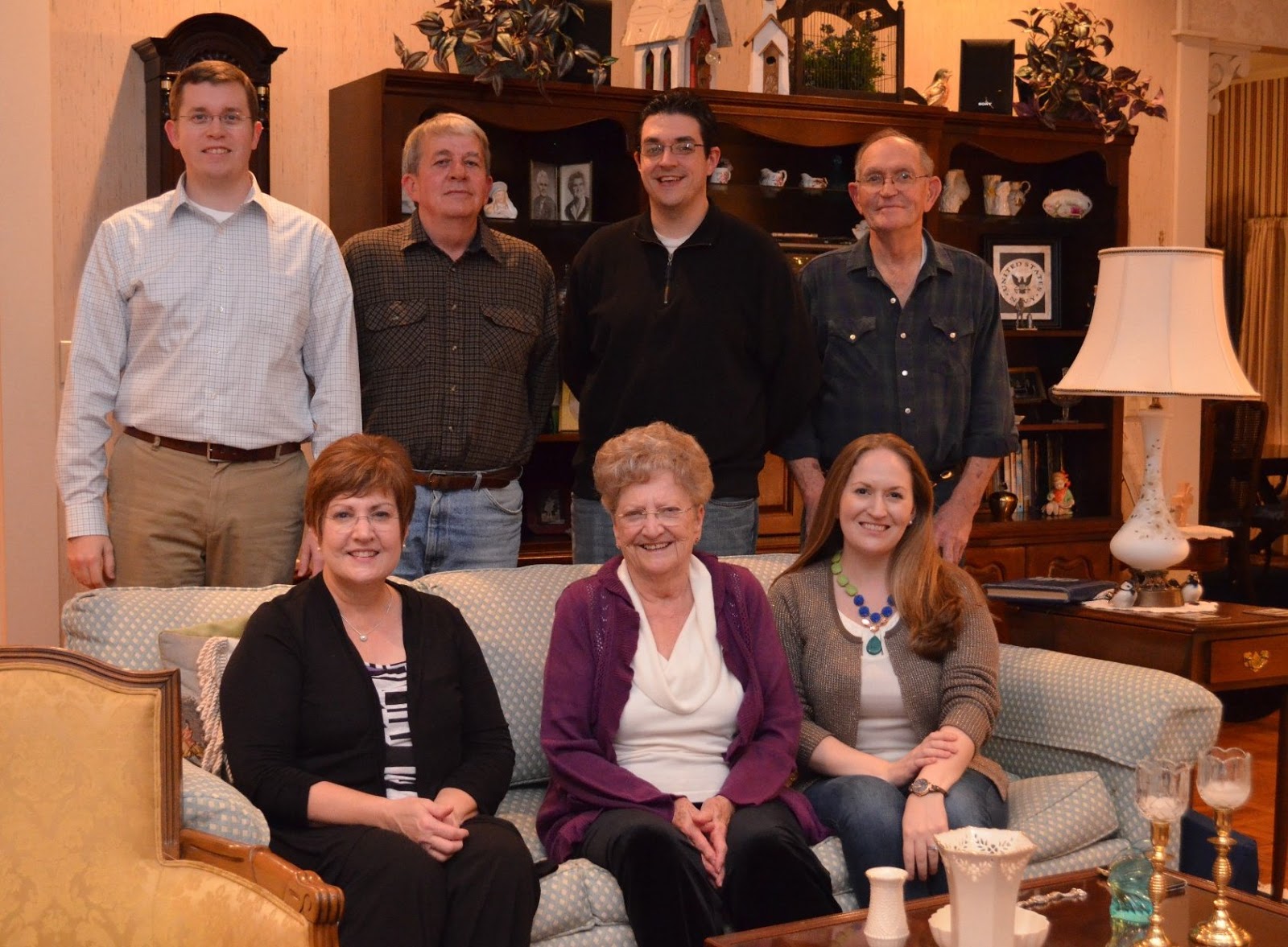 Best of all, we got my very first white Christmas this year! It began snowing on Christmas morning and continued into the evening. The next day, the whole world glistening with snow. Even for snow-weary New England residents, it was quite a thrill! 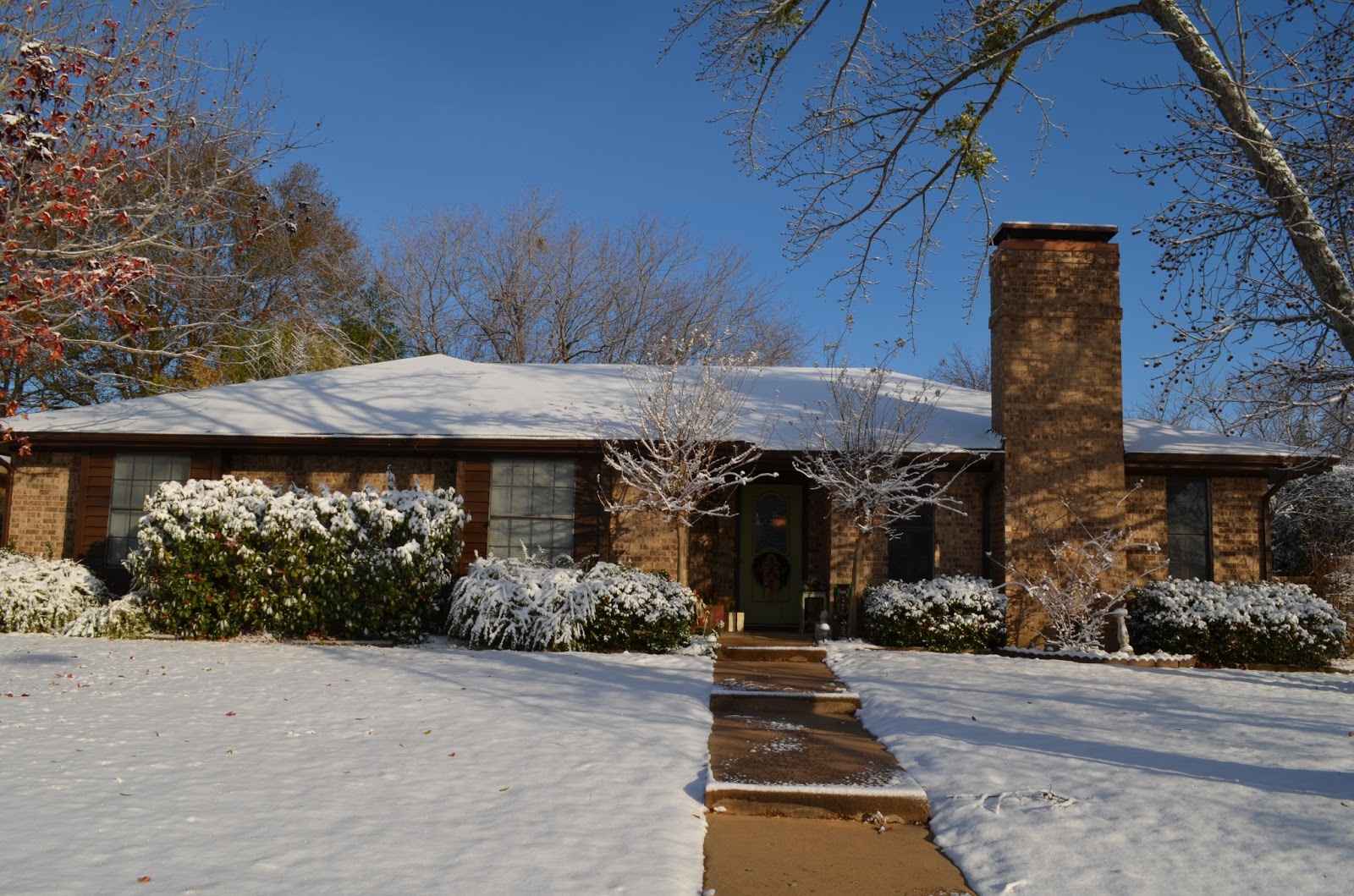 The day after Christmas, we headed south to Austin (Lakeway to be exact). After about 7 hours, a few detours, lots of farm land, and a mandatory stop at Whataburger, we arrived. Again we were greeted by a house full of family, and this time there were boxes full of Rudy's BBQ and tins full of homemade Christmas sweets. 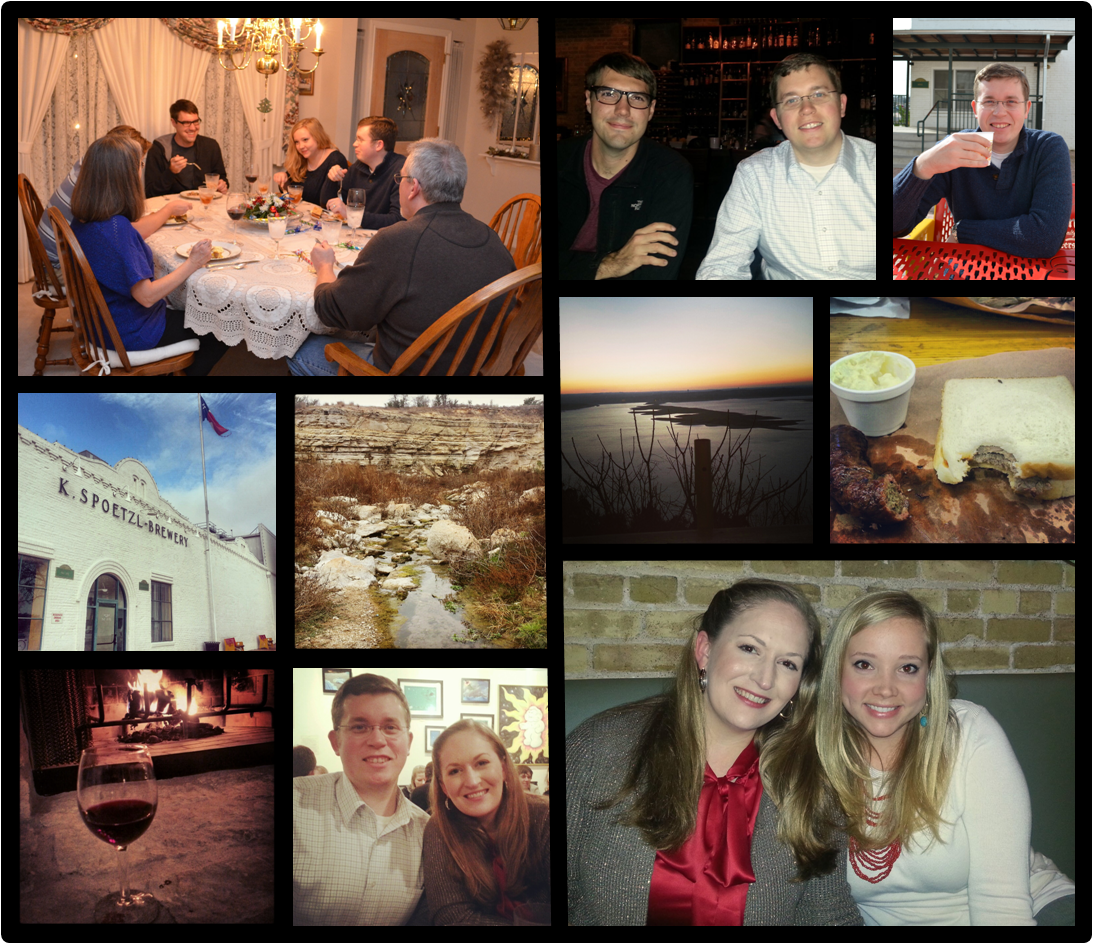 We took a day trip to Shiner to visit the Spoetzl (Shiner) Brewery and stopped in Lockhart for some of Smitty's famed BBQ. We visited The Oasis to see the sun set over Lake Travis. At Grammy and Pampa's we watched football and played cards around the kitchen table. We watched movies, caught up on the family gossip, filled up on pepperoni rolls at Double Dave's, bought too many books at Half Price Books, and ate even more TexMex.

We spent New Year's Eve in downtown Austin with our friends Jimmy and Laura, kicking things off with craft cocktails at the very stylish Peche. Next was a Beer Pairing Feast at the wonderful Black Star Co-Op, the stars of the show being their beers, a beautiful rib-eye and a big bowl of fried black eyed peas -- so crunchy and with a little kick. We spent the rest of 2012 enjoying pints of Texas beer at one of our favorite old haunts, The Ginger Man. 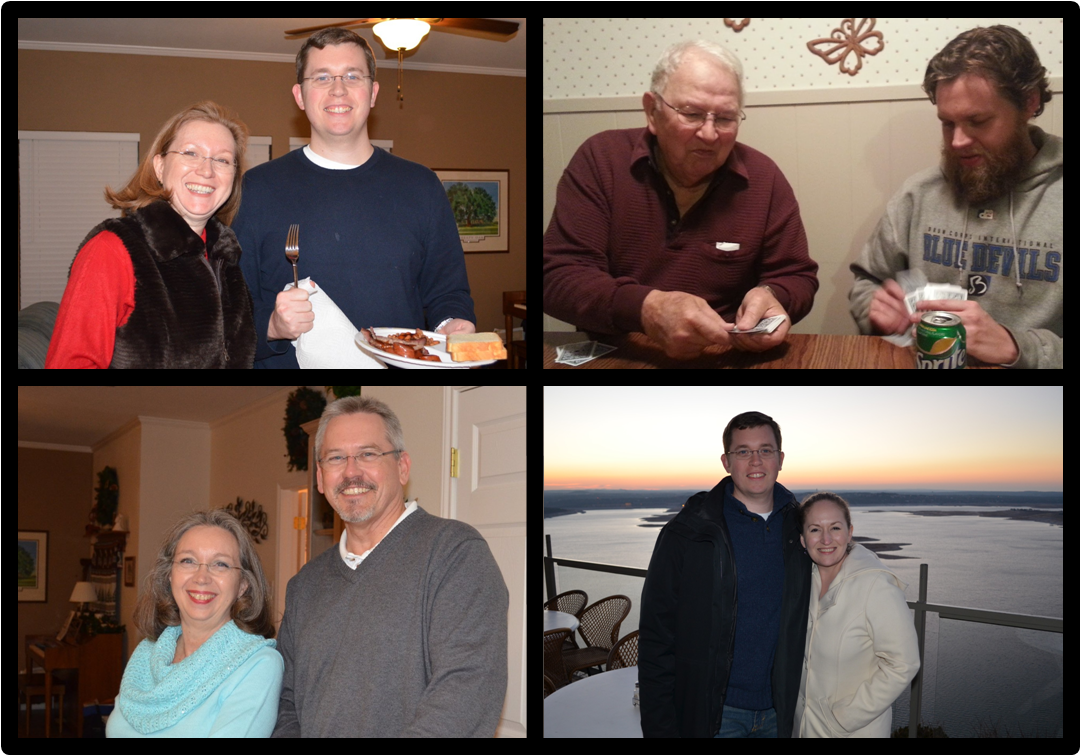 New Year's Day started on the right foot with Texas Chili Parlor's mouth-singeing chili in a bowl of Frito Pie. Back in Lakeway, we spent our last evening enjoying quite a feast, complete with black-eyed peas for good luck in the coming year.