Last night (Oscars night!), my poor husband was battling through the final throes of thesis writing.  I thought that a warm dinner and a glass (or three) of wine might do him good, so I paused the Red Carpet coverage and began poking around the pantry.  I had a bag of brussels sprouts in need of attention due to a grocery store impulse buy last week, but I didn't have all of the ingredients for one of my favorite brussels sprouts recipes.

Well, you know what they say about necessity being the mother of invention. What my fridge lacked in pancetta and shallots, it made up for in bacon and spanish onions. I was fresh out of pine nuts, but I had plenty of walnuts (also a cheaper option).  I took a few liberties with the recipe and ended up with a hearty and satisfying dish that I liked even better than the original. 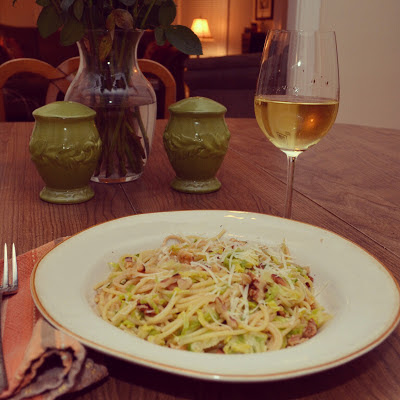 Directions
Using the slicing attachment of a food processor, thinly shave the brussels sprouts (you could also use a mandoline or do it the old fashioned way with a knife).

In a large skillet over medium-high heat, cook bacon until crisp. Push the bacon toward the outer edges of the pan, and add the onion and garlic to the center. Cook, stirring occasionally, for about 5 minutes until the onion begins to soften.

While onion and garlic cook, add spaghetti to boiling salted water and cook according to package directions.

Once onions are softened, add brussels sprouts, chicken broth, vermouth, and salt and pepper (to taste) to the skillet, scraping up any browned bits on the bottom of the pan. Cook for another 5 minutes, until brussels sprouts are tender.

Drain pasta when done, reserving about 1/4 cup pasta water. Add pasta and reserved pasta water to the skillet and toss to combine. Add walnuts and grated parmesan cheese, and toss.

Serve immediately, sprinkled with a little more parmesan. (A little extra cheese is always a good idea)
Posted by Paige at 2/25/2013