When I was in college, I spent two summer internships in LA before moving there following graduation.  During one of those internships, I joined my friend Diana for a cookout at the home of an Argentenian co-worker. It was a beautiful California summer day, and they had sausages on the grill. The grill master happily placed one on my plate and pointed to a large bowl of green sauce next to the grill. As he drizzled a large spoonfull over the grilled meat, he told me it was called Chimichurri. I immediately fell in love, never having tasted anything like it.  Following the cookout, he was kind enough to share his recipe, and I'm still using it six years later!

While his original recipe called for two bunches of parsley and 1/4 cup of red wine vinegar, I tweaked it a bit. In some regions, cilantro and lemon juice are used, so I added a little bit of both (a great addition for a cilantro lover like me). It's a versatile sauce, good with any grilled meat (or vegetables)!.  Monday, I made a batch to drizzle over steak and then tossed a little bit with grilled potatoes for a wonderful side dish. 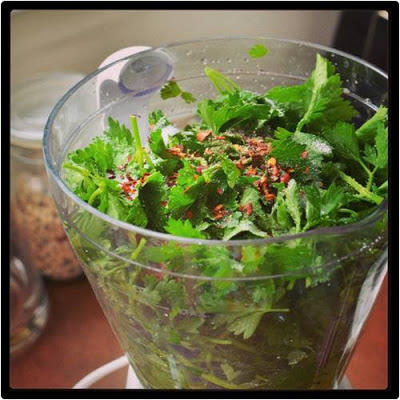 Directions
Combine all ingredients in a blender and blend until it comes together into a sauce. Taste and add more salt and pepper to taste.  It's as simple as that! 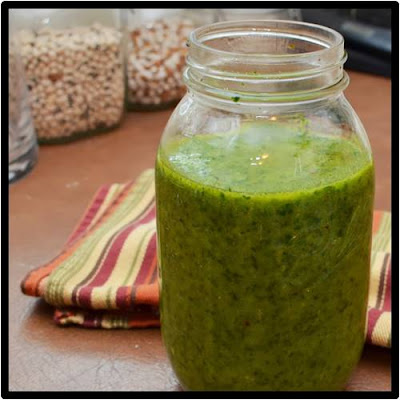 Directions
Place the halved potatoes in a medium sauce pan and cover with cold salted water.

Bring to a boil, and let the potatoes simmer for about 8 minutes, until they are almost done (you should be able to insert a paring knife into a potato half fairly easily but still meet some resistance).

Drain the potatoes and toss with about 2 tablespoons of the Chimichurri.

Grill over med-high heat for about 2 minutes. Flip and grill for another 1-2 minutes until lightly golden brown.

Serve topped with the remaining Chimichurri. 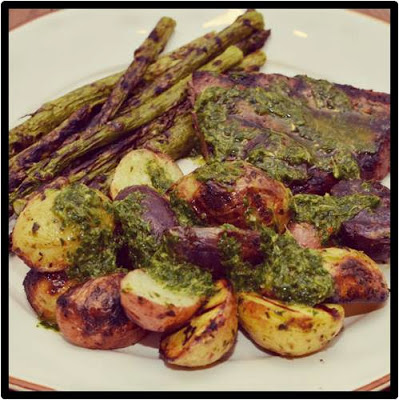